Patching Pays Off – Eye Patches & Dr. Duss To The Resc

Patching Pays Off – Eye Patches & Dr. Duss To The Rescue! 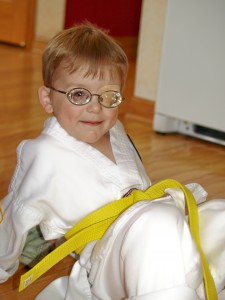 A very active J.R. gets patch time in after karate

The Story of a Big Brother, Little Brother & Eye Patches

When I first started understanding the scope of my son J.R.’s vision challenges, it was a lot to wrap my head around. It took me a long time to accept that the genetic structure of his eyes and lenses weren’t conducive to natural, easy vision. Fairly early in our discovery of his extreme near-sightedness, it was determined that he needed to begin patching his stronger eye to help his other, weaker eye catch up. Even though as a mom I was completely overwhelmed by the uncertainty of his vision future, I was also fiercely determined to do whatever it took to give him the best shot at seeing 20/20 out of either or both of his eyes. This meant I was faced with the daunting task of patching a two-year old dynamo who never enjoyed being told what to do. First things first, I had to catch him before I could even occlude his stronger eye.

As determined as he was to throw temper-tantrums and remove his patch, I was equal to the task. It took every last ounce of my emotional reserves to keep him compliant with his ophthalmologist’s recommendation of 3 hours of patching each and every day.

How many hours per day patching is enough when treating amblyopia?

The mainstay of treating amblyopia is patching of the dominant (good) eye, either full or part-time during waking hours. The prescribed number of hours of patching will depend on the visual acuity in the amblyopic eye and whether treatment has been successful in the past. Your doctor will prescribe the appropriate time for you.
-aapos.org

Eventually, J.R. learned that Mom was serious and he reluctantly and often dejectedly came to accept his daily patch time. It helped that he was usually allowed to watch a favorite show, get a special story read to him by me or play computer games. Once he realized that patch time had positive associations with it, this helped his willingness increase dramatically.
And, then, wouldn’t you know it. Along comes his adorable baby brother, Keaton, and he, too, needed glasses and patching right from the start. 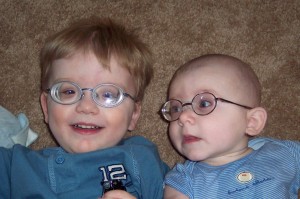 The silver lining was that since J.R. was already so used to patching, it was easy to get Keaton on board. Yes, he still had tears about it, but knowing that his big brother had to do the same thing made everything better. This also works with using manners, eating broccoli (okay, not so much) and going to bed with a good attitude. Whatever J.R. does, it is certain Keaton wants to do the same for better or worse. Instead of feeling frustrated that I had two boys in patches, I took it as a blessing. They were in this together. 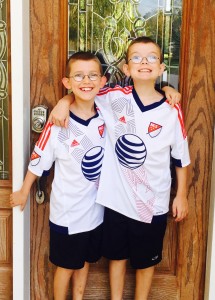 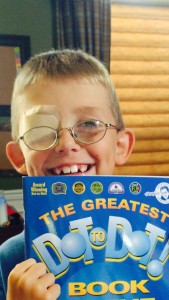 Keaton uses his patch time to complete some dot-to-dots, a favorite past-time of his.

As the years went on and we came under the incredible care of Dr. Duss after a family move to Florida, patching became a way of life for us. Even after the boys had their lens removal surgeries, Dr. Duss was adamant that patching must continue even as their overall visual acuity had improved. Until their vision equalized in both eyes, patching was a non-negotiable.

Then, on our recent follow-up visit with Dr. Duss, she finally said the words that our family had longed to hear….“No more patching!”

I couldn’t believe it. What we started with J.R. over 8 years ago finally paid off. We had bumps in the road, eye surgeries and other challenges with the boys but we never gave up.

Our reward is two amazing boys that have equal vision in both their eyes.