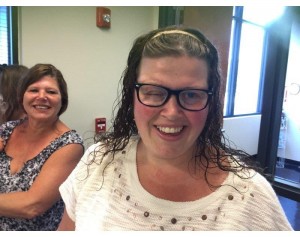 The remarkable Tiffany, with her mom in the background, showing her positive spirit before surgery

Life Can Change In An Instant

For Tiffany this instant came in the form of a car accident. Back in November of 2010 Tiffany was in a terrible accident that completely changed everything. She experienced a Traumatic brain injury (TBI), a stroke which left her with physical challenges and an aneurysm of the optic nerve which caused vision loss and made her eyes criss-cross. According to Tiffany’s mom, Wanda, she wasn’t even expected to live through that first night after the collision. That’s when I realized that in speaking with Tiffany, I was speaking with a walking, talking miracle.

While interviewing Tiffany, I could tell immediately that she had a lot to share about her journey. She was living in Miami when all of this began and had received care from a variety of specialists including an ophthalmologist. This ophthalmologist eventually performed surgery on Tiffany to straighten her eyes, but did not address some of the cosmetic aspects that were still a concern to her and her mother. After moving to Jacksonville and being seen by Dr. Charles Duss at the Atlantic Eye Institute, he immediately recommended that Tiffany should go to his wife, Dr. Dawn Duss, because of her ‘awesome’ skill set specific to Tiffany’s needs. Tiffany’s main concern was not only getting her eyes more properly realigned, but she had a significant droop in her right eyelid.

Feeling as if they had nothing to lose at this point, Tiffany, accompanied by her ever-supportive and present mother, met with Dr. Dawn Duss shortly thereafter. During their initial meeting, it became clear that Tiffany’s entire eyeball would have to be lifted before her drooping eyelid could be corrected. Dr. Duss’s assessment quickly showed both of them, that without properly repositioning her eyeball, fixing the droop wouldn’t look right. Dr. Duss made sure to answer all of their questions and told them what she could do. Ultimately, she left it up to them to make the final decision. Tiffany and her mother both deeply appreciated Dr. Duss’s collaborative approach. It made everything seem easier for them. They both decided that Tiffany should go for it.

On the day of the surgery, Wanda settled into the waiting room for what she anticipated to be a fairly short procedure. Four hours later she was still there. When she finally got the update as to why it was taking much longer than expected it was because of Dr. Duss’s refusal to give up until she ‘got it right’. Due to scar tissue from previous eye surgeries and other factors, Dr. Duss ended up having to take muscle from Tiffany’s ‘better eye’ and use it to reconstruct and align everything properly. When it was all said and done, Dr. Duss told Wanda, “I wasn’t going home until it was fixed.”

To this day, Tiffany and Wanda are floored by Dr. Duss’s commitment to excellence. According to Wanda, “Dr. Duss has been just wonderful. We have always felt so comfortable with her. Her office and staff are warm and welcoming. They always take my calls to answer my questions.” Wanda not only appreciates that she can ask questions regardless of what they are, she now takes her granddaughter there for her regular eye exams. She figures if Tiffany’s extreme situation could be handled so beautifully, a regular vision check would be top-notch as well. Rest assured, if you choose Pediatric Eye Consultants and Dr. Dawn Duss as your vision care provider, you will be amazed at the level of care you will receive.